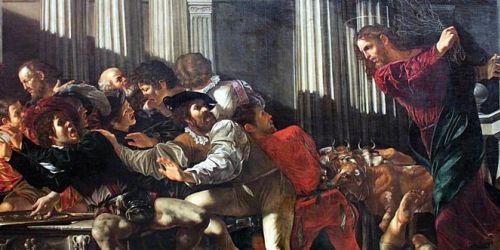 The story of Cleansing of the Temple seems to be presenting Jesus in a violent way. In this way, we are not used to imagining him. What happened to the kind and loving Jesus, the Lord of love? It is challenging to find a balance between these pictures. To understand the story we need a little help from the historical background.

There are various differences between Synoptic accounts and John’s description of the event. Nevertheless the most important is that of time. While Synoptics place the event at the end of Jesus’ ministry as one of his last public actions serving also as an act to which his accusers will refer to, in John’s Gospel the event is placed as the first public appearance. John does not explicitly explain this placement. Therefore we are not quite sure if there were two cleansings or the placement is due to theological-authorial concerns.

The occasion for Jesus to appear in Jerusalem is the Passover - the first of three in the Gospel (John 2:13; see Exodus 12). This greatly illuminates the event because a lot of faithful Jews from the great distance were visiting Jerusalem. In the Temple, they could offer a sacrifice. However, since coming from the great distance, they could not travel with animals they would later offer there. For this reason, there was instituted market to sell animals, therefore people can buy an appropriate victim. Or people could simply offer the money. Next, the Jews older than 20 years were obliged to pay Temple tax (Exodus 30:11-16). However, the tax had to be paid in the Temple currency (Tyrian coinage; see Matthew 17:24-27; 26:14). Therefore, people had to exchange various imperial currency into Tyrian coinage. The reason for the exchange was the high purity of silver in the Tyrian shekel or probably that the imperial coins bear an images pagan rulers (however, even Tyrian shekel bore a pagan deity). Further, the Jews have been forbidden to mind their own coins. Because of the importance of these duties, the whole process was abused by the great prices of the services. All of this took place in the outer court of the temple (gentiles courtyard).

In the text, when Jesus arrives into the Temple, there are described two groups associated with the above: “those selling (τοὺς πωλοῦντας [tús pólúntas])” and “moneychangers (κερματισται [kermatistai], κολλυβισται [kollybistai])” (John 2:14). The sellers specifically sell “cattle and sheep and doves (βόας καὶ πρόβατα καὶ περιστερὰς [boas kai probata kai persteras])” that was used for the sacrificial offering. While moneychangers were “sitting (καθημένους [kathémenús])” at tables exchanging money. The word κερματιστής generally denotes someone who changes large money into small (from κερματίζω meaning “to cut small”). The other word is κολλυβιστής (from κόλλυβος meaning “small coin”) pointing to the fee for exchange. This sight forces Jesus to act which is described in the following verse. Traders were drove out. This was not done in some cruel of violent matter. If this was so, Roman troops would quickly come to make the order. Nor do we read about a harsh reaction of the affected people.

The significance of the action is explained by Jesus himself: “do not make the house of my Father a house of market (μὴ ποιεῖτε τὸν οἶκον τοῦ πατρός μου οἶκον ἐμπορίου [mé poieite ton oikon tú patros mú oikon emporiú])” (John 2:16). The problem with these services was not only that the high percentage of the price went to sellers pockets but that they made something quite else from the worship - putting an artificial barrier between people and God. This is what concerns Jesus because he came to lift the barrier in the first place.

Another significance of the event is that Temple was built for one specific purpose. It was to be a meeting place with people and God (Exodus 25:8). Inside, in the most inner place, holy of holies, dwelt shekhinah - his presence (from “dwell, settle (שׁכן [šchn])”; see Exodus 40:34-35). This is why the Temple was so important in Judaism. To place any obstacles to enter Temple worship was to put this obstacle between people and God. But for the Gospel of John, the living Temple is Jesus himself (“dwell (ἐσκήνωσεν [eskénósen])” in John 1:14 is an allusion to “tent (σκηνή [skéné])” of the tabernacle). It is him where we truly meet God (John 14:9). This is also what Jesus points out in saying “destroy this temple and in three days I will raise it (λύσατε τὸν ναὸν τοῦτον καὶ ἐν τρισὶν ἡμέραις ἐγερῶ αὐτόν [lysate ton naon túton kai en trisin hémerais egeró auton])” (John 2:19) and John explains in his narration (John 2:21).

Putting all this together, it justifies Jesus’ emphatic reaction. He does not only cleanses the Temple but also takes the opportunity to show where God can be truly found.