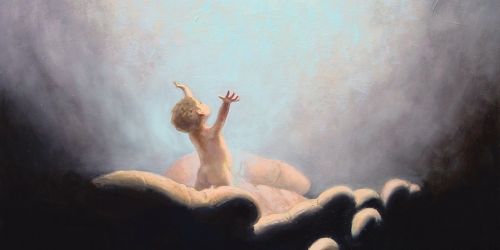 Verses of Romans 8:14-17 open one of the essential Pauline theological themes that we call adoption. In these verses, Paul develops his thesis from Romans 8 about the implications of the presence of the Holy Spirit in Christian life. One of the outcomes is the interconnection of God and people and their acceptance as sons (Rom 8:14). This is explicitly said in a thesis: “you were given a spirit of adoption in which we cry „abba father!“ (gr. ἐλάβετε πνεῦμα υἱοθεσίας ἐν ᾧ κράζομεν· αββα ὁ πατήρ [elabete pneuma hyiothesias en ho kradzomen: abba ho patér])” (Rom 8:15). The key word of the concept of adoption is the word hyiothesia (gr. υἱοθεσία) which is properly translated as “adoption” not “sonship.” This concept appears only in Paul (Rom 8:15; 8:23; 9:4; Gal 4:4; Eph 1:5).

For Paul, the key thought behind the whole concept is the change of the status of man on the legal ground. In the context of Rom 7-8, the adoption includes the change from the status of a slave to that of a son. An adopted son has the same rights as a normal son including the right of heritage. The key information is that Christians are heirs, therefore, they have the right to fulfilling the promises of God. Adopted sons are all those who are influenced by the Spirit, therefore it is a precondition of the adoption. It is an act, by which all of those who believe in Christ are accepted as God’s children. Although the adoption is a real reality for Paul, its full realization will be fulfilled in the future (Rom 8:17).

Further, very important fact is that the sons are those who are led (gr. ἄγονται [agontai]) by the Spirit (Rom 8:15). Paul, therefore, points us to the sphere of the influence. It is not the sin as it is described in Rom 7 or the flesh as in Rom 8 but the Spirit who controls the activity of man from the inside according to God’s will. Therefore, the son is free and he is not a slave of the flesh.

The phase “abba father (gr. αββα ὁ πατήρ [abba ho patér])” is a formula (only 3x in the NT: Mark 14:36; Rom 8:15; Gal 4:6), in which we address God as the Father, who is not distant from us. The phase could be literally translated as “father, father.” Thus, man is addressing God in the same way, in respect to the content, but using different words, thus giving some emphasis to the fact of the content. The use of the Aramaic word abba (אַבָּא) is not an exhortation to any infantile addressing of God. It is not possible to prove the popular tendency to translate this word as a daddy or dad (as Joachim Jeremias suggests, and Haenchen and Barr refute).

Paul, therefore, sees in the work of the Holy Spirit a new man, who is reconciled by grace to God and is in his proximity as a son. The consequences of such a relationship are that man becomes the rightful heir of God's promises and salvation.