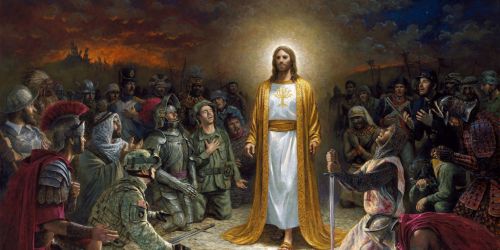 The term Armageddon is widely known, mainly thanks to the contemporary popculture, to denote fatal apocalyptic images of destruction. The word is drawn from the Bible, however, seeing it a bit differently.

Armageddon is a transliteration of Greek word Ἁρμαγεδών which appears only in one place in the entire NT. This place is Revelation 16:16 which is the sixth plague in a series of seven. The sixth plague describes gathering for a great battle taking place in an area called Armageddon. What has drawn the considerable attention of various interpreters throughout history was the desire to locate that place. However, there is no actual place of that name. Nevertheless, there are different ways to understand the word. Of these, two ways are the most prominent.  The text suggests reading the word in Hebrew (καλούμενον ἑβραϊστὶ "called in Hebrew"). Therefore, it led to a recognition that the word is composite of two Hebrew words har-megiddon or ar-megiddon. The first is a transliteration of Hebrew words הַר [har] "mountain" and מְגִדּוֹ "megiddo" (in Zech 12:11 מְגִדּוֹן) using the rough breath mark at the begining of the first word. While the second is derived from a transliteration of the first word using the smooth breath mark pointing to עִיר [ir] "city." However, there is no mention of a mountain of Meggido in the OT. While on the other hand, the city of Meggido can be attested in various texts (see Joshua 17:11; Judges 1:27; 1 Kings 4:12; 9:15; 2 Kgs 9:27; 23:29, 30).

There are, therefore, two explanations. What might be an apparent reference to the place of Megiddo is the fact that ancient Israel often fought battles in Valley of Jezreel near that place as is attested by several texts (see Judges 5:19; 2 Kings 23:29; 2 Chronicles 35:20-22). Therefore, this might be the reference to this ancient battleground. Another strong reference is that the mount Carmel is nearby the city. Consequently, it might point to a spiritual battle which occurred in 1 Kings 18:19-46 portraying a struggle between Eliah and false Baal's prophets to demonstrate who is the real "Baal" - the giver of the rain.

Revelation 16:16 is not the only reference to the battle of Armageddon. It is portrayed in parts in 16:16, 17:14, and 19:19-21. Taking these two explanatory pictures into consideration, we might view the final battle described in these texts as a spiritual battle between true God and his false counterpart. Opposing side gathers the whole world against God and his faithful to finally crush them. However, this is not what will eventually happen as the book of Revelation shows.