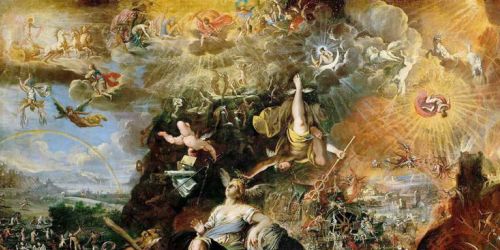 The first three verses of the Apocalypse of John compose an introduction to the whole book. We are introduced to the main agenda, expectation, and form of the book.

The first and foremost information we are confronted with is “revelation (ἀποκάλυψις [apokalypsis])” (Rev 1:1). This Greek word does not point to any destruction of the planet scenario as rather to “unveiling, uncovering” (which is also the word’s possible translation) of some realities impenetrable or unthinkable by human perception and reason. Similar to this notion is Paul’s use of the word in Galatians 1:11-12 (cf. Rom 16:25; Eph 1:17).

The book is also considered with connecting this revelation with the person of “Jesus Christ (Ἰησοῦ Χριστοῦ [Iésú Christú])” (Rev 1:1), either in the way that he is it’s author or that it is specifically concerned with his person as such (both possibilities are allowed by the grammar of subjective or objective genitive).

This revelatory agenda is further expressed in words “in order to show (δεῖξαι [deiksai])” and “signified (ἐσήμανεν [esémanen])” which also constitute the book’s form. The subject of the reason for the revelation is the imminence of “things that are needed to happen in speed (ἃ δεῖ γενέσθαι ἐν τάχει [ha dei genesthai en tachei])” (Rev 1:1) similarly noted in Rev 1:3 that “the time is near (καιρὸς ἐγγύς [kairos engys]).” Therefore, reading these verses, there is an urgent need on the part of God to approach with this revelation in order to help to enlighten minds of his servants. Or to say it in another way: there are hidden things in this world that need to be addressed and explained by God himself.

There is a great debate among scholars about the particular genre of the book. In the book, there can be found three forms: apocalypse, prophecy, and letter. It is impossible to open the discussion here as it would lead in a different way then our thinking here. Nevertheless, However, we can assume from this discussion that the the genre of the book is an apocalyptic prophecy in the form of a circular letter.

Probably the most peculiar issue with the Revelation is its imagery. Figurative language is suggested in the word “signified (ἐσήμανεν [esémanen])” (Rev 1:1) and throughout the book by frequent use of words ὡσει [hosei], ὡσπερ [hosper], ὡς [hos], ὁμοιος [homoios], ὁμοιως [homoiós] denoting simile. Such a language reaches beyond mere referential meaning. This kind of communication points behind the actual signs employed in the text. These symbols are influenced by cultural concepts, intertextuality or the way how metaphor works. Therefore, the symbolic language is not some kind of code language as a rather literary craft that is needed to be taken into consideration.

What the book expects of its readers is this particular behaviour “keeping the things written in it (τηροῦντες τὰ ἐν αὐτῇ γεγραμμένα [térúntes ta en auté gegrammena])” and the reason for that is “that the time is near (ὁ γὰρ καιρὸς ἐγγύς [ho gar kairos engys])” (Rev 1:3). Therefore, we can observe that people should adhere with urgency to the content of the book Revelation because of what the described and unveiled realities truly are even if it is not apparent by human perception.