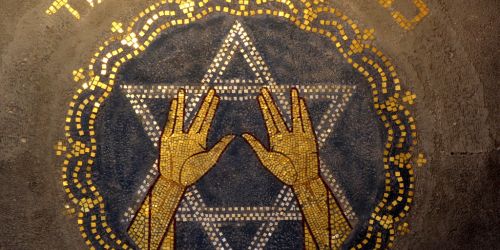 The text of Numbers 6:23-27 is known as Priestly Blessing or Birkat Kohanim (coming from Hebrew ברכת כהנים). This liturgical text bears a strong expression of the idea of God in the Old Testament. The passage is a conclusion of a series of priestly legislation. The primary concern of the text is the blessing that is to be bestowed upon the people of Israel. The practical example of the blessing is recorded, as it is assumed, in Leviticus 9:22.

The words of the text are intended to Aron (אֶֽל־אַהֲרוֹן [el-aharón]), who is the chief priest, and the people of Israel (וְאֶל־בָּנָיו [wel-banajw]) (Num 6:23). These words are spoken to Moses from the Lord (Num 6:22). The form of the address is situated as precise and fixed instruction (note words “this” כֹּה [kóh] and “say to them” אָמוֹר לָהֶם [ámór láhem]) on how and what to speak to the people. As already mentioned above, the main topic is “blessing (תְבָרֲכוּ [tvárchú])” which is to be bestowed “upon sons of Israel (אֶת־בְּנֵי יִשְׂרָאֵל [et-bné jisráél]).”

The blessing can be structured into three sentences bounded by pairs of six verbs: בָרֶכְךָ and יִשְׁמְרֶךָ (Num 6:24), יָאֵר and יְחֻנֶּךָּ (Num 6:25), יִשָּׂא and יָשֵׂם (Num 6:26). All of these verbs are pronounced in the third person speaking of the Lord’s gracious treatment. Lord is also explicitly mentioned as the subject in all of the three sentences (note the word יְהוָה). What is important to note is that the meaning of these verbs does not convey any idea of “may.” Instead, they carry the concept of announcement or statement reflecting that this the actual reality of God’s attitude towards Israel. The direct object of Israel is employed in every verb using pronominal suffix אַתָּה. We can also note the gradual progress throughout the sentences. The first sentence is very short of modifying words while the last is much fuller of them.

The first and briefest sentence (Num 6:24) speaks about priestly prayer in regard of “bless you (בָרֶכְךָ [bárechchá])” and “ keep you (יִשְׁמְרֶךָ [jišmrechá]).” The blessing (noun בְּרָכָה [brácháh]) refers to the idea of fertility, prosperity, and abundance (e.g., Gen 1:26). The keeping refers to the notion of preservation, or covenant faithfulness (Ex 19:5; Lev 18:4). Both of these ideas are the exclusive works of the Lord.

The second line (Num 6:25), middle in length, introduces two ideas of “shine (יָאֵר [já’ér])” and “have mercy (יְחֻנֶּךָּ [jchúnnechá])” to the prayer. The direct object of the shining is “his face (פָּנָיו [pánajw]),” which refers to the Lord’s positive presence (e.g., Psalm 30:8). This presence is further connected to having mercy reflecting tender affection for Israel (e.g., Psalm 86:15; Ex 33:19).

The third sentence (Num 6:26) and longest speaks about actions of “lift up (יִשָּׂא [jissá’])” and “put (יָשֵׂם [jásém]).” The lifting up of the face refers to the same idea as the case of shining. The putting is connected with a direct object of “peace (שָׁלוֹם [šálóm]),” which is to be thus bestowed upon Israel. The concept of shalom means fullness of life and wholeness in all areas of life (Gen 15:15; 29:6; Josh 9:15; Isa 59:8).

The conclusion of the blessing (Num 6:27) describes the effect of the blessing upon Israel. The prayer projects the name of the Lord (שְׁמִי [šmí]) on the people of Izrael. The very same idea that the people of Israel carry the name of the Lord is also mentioned in Exodus 20:7. The name itself is an expression of the nature of God or his features (Ex 3:15; Ex 33:19; Ex 34:5). In the Old Testament, there are various names for God (like el-šadaj, el-jon, el-olam, el-r, etc.) in order to express his nature and behavior toward people.

The goal of the blessing is to assure of Lord’s generous work towards the community of Israel. Therefore it is important not to vary the words of the text but to keep its solid form as is stressed in the instructions.