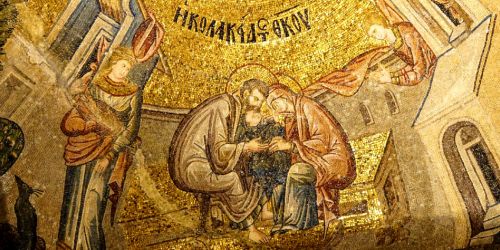 The hymn of Colossians 1:15-20 focuses on the agency of Christ in the creation of all that is. The flow of the text is interrupted by the hymn in the change of the personal pronouns from the first and second person (I, you) to the third person (he). In the end, It is then resumed back to previously used personal pronouns.

The hymn can be divided into two parts: supremacy in creation (Col 1:15-18) and supremacy in reconciliation (Col 1:18-20). This division is not only thematic but is also visible on a textual level. First, the division is reinforced by using a phrase “who is (ὅς ἐστιν [hos estin])” (Col 1:15 and Col 1:18b) at the beginning of each part. Second, in both instances, there is also a word “firstborn (πρωτότοκος [prótotokos])”.

The focus of the hymn is the divine status and supremacy of Christ which is based on the argument of the reality of Christ’s preexistence.

Beginning with the first part, the text starts with a thesis about Christ: “who is an image of the invisible God, firstborn of all creation (ὅς ἐστιν εἰκὼν τοῦ θεοῦ τοῦ ἀοράτου, πρωτότοκος πάσης κτίσεως [hos estin eikón tú theú tú aoratú, prótotokos pasés ktiseós])” (Col 1:15). This thesis is then answered and explained in the following verses as is indicated by the conjunction “because in him… (ὅτι ἐν αὐτῷ… [hoti en autó])” (Col 1:16). In the thesis, there are two claims pertaining to Jesus: εἰκὼν (image) and πρωτότοκος (firstborn). Jesus being the εἰκὼν (image) of God might be an allusion to Gen 1:26 (however, this argument goes a different direction) but more importantly, it is an expression of the fact that Jesus is the actual manifestation of God himself. God is invisible, however, through Christ, this cloak is unveiled. This is, for example, in sound with the theology and Prologue of the Gospel of John. Understanding what it means that Jesus is the πρωτότοκος (firstborn) of/over all creation through our cultural concepts might be a bit tricky. Therefore the word πρωτότοκος must be understood in the context of the whole hymn seeing Jesus as the agent and source of the creation. Moreover, it must be understood as terminus technicus for someone of supreme or forefront position as can be attested by some OT texts such as Ps 89:27 or Ex 4:22-23 and concepts of personified Wisdom (Prov 8:22-31; Wis 9:9; Sir 1:4).

The stated divine nature and supremacy position of Christ is well argued in the explanation part (Col 1:16). It makes Jesus an instrument or agent of creation. The part is amazingly composed in concentric style marked by these phrases: “in him were created all things (ἐν αὐτῷ ἐκτίσθη τὰ πάντα [en autó ektisthé ta panta])”, “all things through him (τὰ πάντα διʼ αὐτοῦ [ta panta di autú])” and “for him were created (εἰς αὐτὸν ἔκτισται [ies auton ektistain])” (Col 1:16). The highlighted words point to his agency in the creation as well as strengthen the argument by the usage of three different prepositions. The description inside this magnificent composition demonstrates the supremacy of Christ above all of these mentioned powers. This catalog of powers symbolizes that he is above everything.

Next, the first part continues with that Christ is not only the creator of everything but also reiterates his preexistence: “he is before all things (αὐτός ἐστιν πρὸ πάντων [autos estin pro pantón])” (Col 1:17). This statement further supports his supremacy which is in view here in the first place. He is also the sustainer of the creation since “all things hold together in him (τὰ πάντα ἐν αὐτῷ συνέστηκεν [ta panta en autó synestéken])” (Col 1:17) which might resemble popular Stoic and Platonic philosophies about the role of Logos in sustaining the universe. However, here the argument adds to his supreme power which is also highlighted by the perfect active form of the verb συνίστημι (hold together) projecting the activity as permanent and continuous.

The first part is then finalized in stating Christ’s supremacy over the church: “he is the head of the body of church (αὐτός ἐστιν ἡ κεφαλὴ τοῦ σώματος τῆς ἐκκλησίας [autos estin hé kefalé tú sómatos tés ekklésias])” (Col 1:18a). In this way, Jesus is the primary unifying element of the church as well as the whole universe (see Eph 2:15).

Now we turn to the second part of Christ supremacy in reconciliation (Col 1:18b-20). The second part again starts with a thesis: “who is the beginning, firstborn from the dead (ὅς ἐστιν ἀρχή, πρωτότοκος ἐκ τῶν νεκρῶν [hos estin arché, prótotokos ek tón nekrón])” (Col 1:18b). It is also followed by an explanation phrase “because in him… (ὅτι ἐν αὐτῷ… [hoti en autó]),” but it is first preceded with a purpose phrase “so that he would be… (ἵνα γένητα… [hina genétai])” (Col 1:18b). In the thesis, the word πρωτότοκος appears again, however this time as an explanatory term for ἀρχή. This suggests the forefront position we pointed out above. Here, moreover, the text states that Jesus is the beginning of a new creation and a new humanity. The resurrection is then explained as a purpose for “him being first in all things (ἐν πᾶσιν αὐτὸς πρωτεύων [en pasin autos próteuón])” (Col 1:18b).

The explanation of the second part starts with reference to the “in him all the fullness was pleased to dwell (ἐν αὐτῷ εὐδόκησεν πᾶν τὸ πλήρωμα κατοικῆσαι [en autó eudokésen pan to pléroma katoikésai])” (Col 1:19). The whole sentence boils down to the word πλήρωμα (fullness) which is not concretized in any measure and might be again a reference to some gnostic-philosophic speculation referencing to emanations from God (this way of thinking, however, would be rather anachronistic, since these thoughts start to appear in the second century and culminate in Neoplatonism). What is more plausible, however, is reference to fullness of God as is attested in Col 2:9: “because in him dwells all the fullness of deity bodily (ὅτι ἐν αὐτῷ κατοικεῖ πᾶν τὸ πλήρωμα τῆς θεότητος σωματικῶς [hoti en autó katoikei pan to pléróma tés theotétos sómatikós]).” This claim again brings to the foreground the idea of Christ as being manifestation of God.

The thematic climax of the whole hymn is portrayed by two actions: “to reconcile (ἀποκαταλλάξαι [apokatallaxai])” and “making peace (εἰρηνοποιήσας [eirénopoiésas])” of which Christ is the agent - “through him (διʼ αὐτοῦ [di autú])” (Col 1:20). The first action “through him to reconcile all things to himself (διʼ αὐτοῦ ἀποκαταλλάξαι τὰ πάντα εἰς αὐτόν [di autú apokatallaxai ta panta eis auton])” points to the supremacy of Christ in reconciling of everything. The word ἀποκαταλλάξαι (reconcile) is infinitive of purpose stating the reason behind his supremacy. The pronoun εἰς αὐτόν (to him) refers to πλήρωμα (fullness) which refers to God as we explored above. Thus Jesus is the only possible means of reconciliation of humanity and the universe with God (see Rom 5:10; 2 Cor 5:18-20).

The second action “making peace through the blood of his cross (εἰρηνοποιήσας διὰ τοῦ αἵματος τοῦ σταυροῦ αὐτοῦ [eirénopoiésas dia tú haimatos tú staurú autú])” is pointing to the sacrifice (αἷμα + σταυρός) as an instrument of his peacemaking (εἰρηνοποιήσας) (see Eph 2:16). The final part of verse 20 then portrays the universal aspect of reconciliation and peacemaking.

In the broader context of the epistle, the purpose of the hymn is to strengthen the understanding of the readers about the absolute and supreme position of Christ compared to competing false speculations and false teachings. What Paul offers in his message is especially the assurance of universal reconciliation with God provided by Jesus (Col 1:14, 21-22).